select from North, South, East or West facing house, most people will tend to – or will – choose the North facing one and that’s just based on a “partly true” fact that North facing houses are very auspicious.

I say “partly true” because, even a North facing house can be very inauspicious – if and only if – it’s not as per the rules and regulations of vastu shastra.

In other words, facing of a house is not a guarantee of it being auspicious, there’s something more to it than facing and that’s the placement of main door/entrance and remaining rooms of a home.

North Facing House – What Vastu Shastra Says About It

I must tell you that as per vastu shastra, none of the direction is considered bad.

In fact, vastu shastra never says that one direction is good and another one is bad.

Also, as per same vastu shastra, it’s the placement of main door/entrance and other rooms of a home that makes it auspicious or inauspicious; however, a huge importance given to the main door.

Having said that, things are a bit different with North facing houses; since North direction, in vastu shastra, is believed to be auspicious, the placement of door at any location in North side is considered good.

However, even for North facing houses, there are vastu rules and guidelines that – must be – followed which we’ve discussed below.

So, let’s begin the ride.

As said earlier, North direction is considered very auspicious in vastu shastra; hence as per north facing house vastu, you can place main door at any location in North side and it’s not going to harm you at least.

However, there are 9 padas or steps in North side of a house all having different auspiciousness; we’ve discussed this below.

Here, I must also tell you that the most auspicious pada (step) of North side, for accumulating wealth and riches, is the 5th one; now, in order to understand pada or step, all you need to do is it to have a good look at the image below. 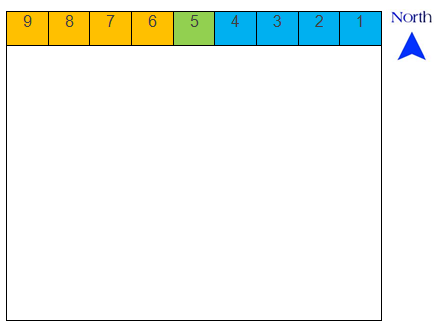 In the image above you can see that the North part (the length from North-East to North-West) is divided in 9 equal parts.

Each part is called as “pada” or step in vastu shastra.

Also, you – must have – noticed that only “pada” numbered 5 is in green color and the pada’s to the right i.e. pada number 1, 2, 3 and 4 are in blue color whereas the remaining pada’s, from 6 to 9 are in orange color.

Here’s what all this means

Having understood rules and guidelines for north facing house vastu, you’re now ready to know what to do and avoid in a north facing home, so just read on.

Avoid a toilet in the NE corner.

Avoid a septic tank in NE corner; in fact this image will tell you the best location to make a septic tank.  Update: More on Septic tank Vastu.

Avoid staircase in North side of the home especially from padas 1st to 5th.

Avoid a plot that slopes from North to South.

Avoid big trees in North side of the house.

Avoid having clutter, dirt, dustbins etc. towards North and NE.

Avoid a cut in NE corner; if your home has it then read our post.