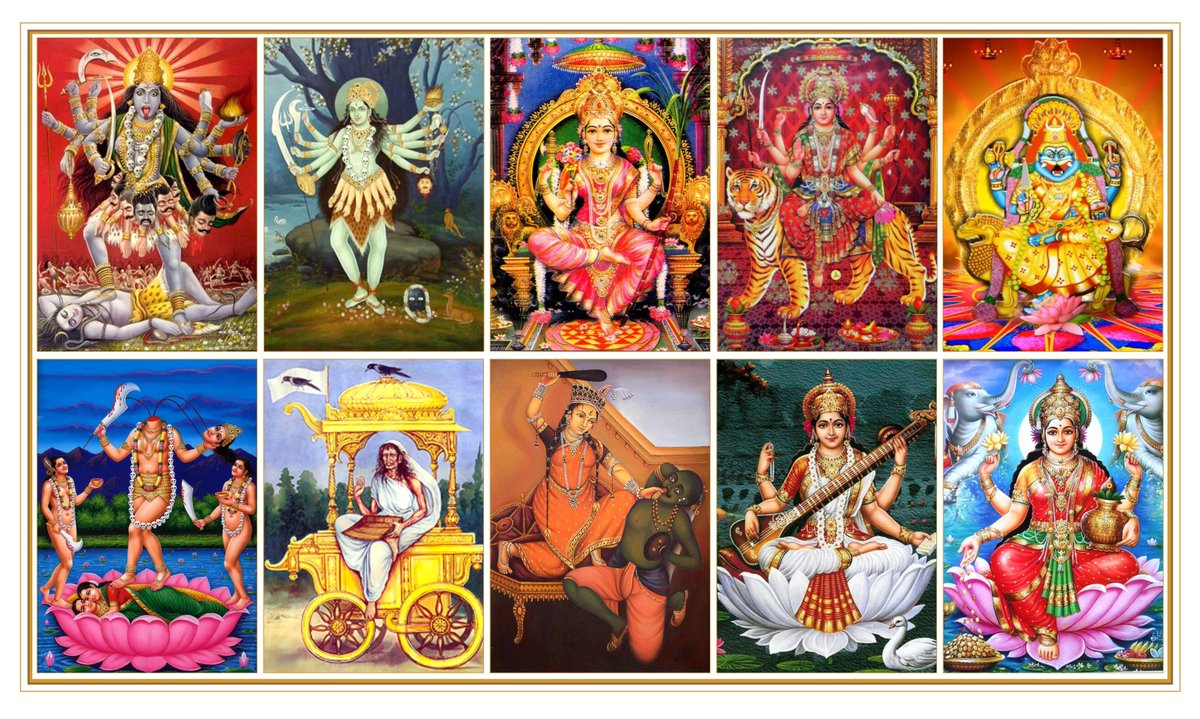 Mahakali
(The goddess with ten heads , black as night and has a horrific and fearful appearance. She is represented to be standing on Lord Shiva who is lying down.She is considered to represent all the ten Maha Vidhyas. While she blesses her devotees with all their wants, worship of her is believed to remove Sani dosha)

(She is blue in colour , wears a necklace of corpses . She has only one head stand on Lord Shiva . She is supposed to shower motherly instinct and is the Goddess of knowledge . She is suppose to give wisdom, profit in business and is suppose to be effective against Guru Dosha)

Chinna mastha
( The very ferocious form of the goddess. She is red in colour , with severed head , drinks blood and stands on a couple in copulation. She is supposed to grant courage to fight with enemies. Magicians also worship her to cause harm to someone.)

She is of golden colour and is normally depicted together with Lord Shiva. Sitting on a throne or seat with four legs. She is the supreme goddess and removes the dosha due to Budha.

She is the goddess of the universe. She is normally depicted with four hands, with goad, rope and the other two showing giving boons and another protection. She removes Chandra Dosha.

She is mother to the good people terror to bad ones. She is seen holding book, rosary, and making fear-dispelling and boon-conferring gestures. She is also known as Baala or Tripurabhairavi.

Dhumavati represents the fearsome aspect of Devi, the Hindu Divine Mother. She is of smoky colour , an old, ugly widow (I,e Withoutr Shiva) and is associated with things considered inauspicious and unattractive in Hinduism, such as the crow and the Chaturmas period. The goddess is often depicted on a horseless chariot or riding a crow, usually in a cremation ground.She is supposed to remove Rahu Dosha.

Bagalamukhi
Bagalamukhi has a golden complexion and her dress is yellow. She sits in a golden throne in the midst of an ocean of nectar full of yellow lotuses. A crescent moon adorns her head. She is believed to have the power to remove Kuja Dosha,

Matangi
She is considered as the Tantric form of Sarasvati, the goddess of music and learning. Like Sarasvati, Matangi governs speech, music, knowledge and the arts. Her worship is prescribed to acquire supernatural powers, especially gaining control over enemies, attracting people to oneself, acquiring mastery over the arts and gaining supreme knowledge.. Those with family problems worship her to get peace .

She is of golden complexion, sits on a lotus flower and is bathed by four elephants, She removes the Shukra dosha.

Rajarajeswari mantra to conceive a child